Keeping Your Faith in Difficult Times 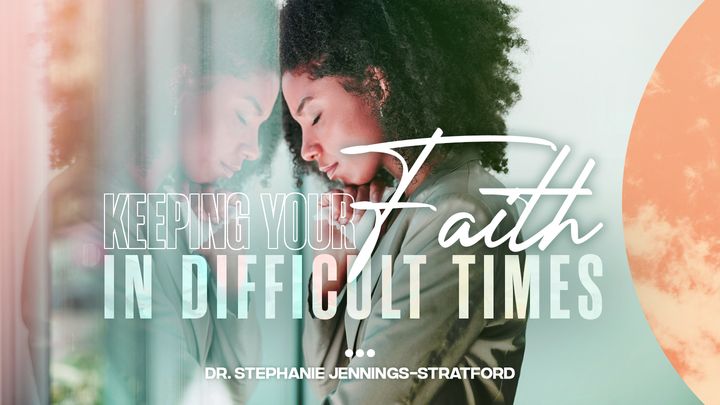 As Christians, we are subject to the difficulties and trials of life in a sinful and dark world. Encompassed by financial, health, relational and other challenges in life may cause you to question or even waiver in your faith. I pray this 3-day plan will offer hope and guide you in how to keep your faith, as you navigate the waters of today’s difficult and trying times.

GOD IS SEEKING A PERFECT HEART

“For the eyes of the Lord run to and fro throughout the whole earth, to shew himself strong in the behalf of them whose heart is perfect toward him. Herein thou hast done foolishly: therefore, from henceforth thou shalt have wars.” (2 Chron.16:9 KJV)

There are times in our life when we face difficulties and adversity. It is in the seasons when we are challenged the most, and our faith is being pushed to the limit, that God wants us to totally trust and rely on Him. He wants us to depend on Him with our whole heart.

In 2 Chronicles 15, King Asa of Judah is  admonished by the prophet Azariah to follow God with his whole heart. King Asa and the inhabitants of Judah proclaimed their loyalty to God and, as a result, lived in peace with no war for many years (2 Chronicles 15:12-15).

When the nation of Ethiopia came against Judah, God gave Judah a great victory (2 Chronicles 14:9-15). However, when the King of Israel rose up to make war against Judah, King Asa sought assistance from Ben-Hadad, king of Aram (Syria) instead of seeking God. This displeased God and the prophet Hanani visited Asa and rebuked him with a word from the Lord. He prophesied, “Herein thou hast done foolishly: therefore, from henceforth thou shalt have wars.” Consequently, Judah was at war for the remaining reign of King Asa.

There are times when we trust God as Asa did when the Ethiopians rose against Judah. However, we may face moments which require a greater level of trust in God,  as when Asa was confronted by the King of Israel, and out of fear, he failed to trust God to protect the Kingdom of Judah. These are the moments in which God is expecting us to stand in the face of adversity with a whole heart. He wants us to give Him the opportunity to show Himself strong on our behalf. We must learn to depend completely on Him, no matter what the circumstances may be, knowing that He has given us total victory through our Lord and Savior Jesus Christ.

THE REASON FOR ADVERSITY

“But the God of all grace, who hath called us unto his eternal glory by Christ Jesus, after that ye have suffered a while, make you perfect, stablish, strengthen, settle you (1 Peter 5:10 KJV).”

The epistles of 1st and 2nd Peter were written to offer hope and encouragement to the early Christians during a time in which they were suffering under an extreme wave of persecution. The Apostle Peter gave them practical instructions on how to live a life that is consistent with the life of Christ, even though they were challenged with great adversity. Peter encouraged them to be sober (temperate, calm and collected in spirit) and to be vigilant (watchful, attentive) for their adversary (Satan, the accuser of the brethren) as a roaring lion, walketh about, seeking whom he may devour (1 Peter 5:8 KJV).

Peter reminded the believers to resist the adversary, to remain steadfast in their faith, and to recognize their fellow Christians were suffering the same persecution throughout the body of Christ (1 Peter 5:9). He assured them their persecution would produce a positive outcome in their lives as believers in Christ.

1 Peter 5:10 names four ways in which adversity enhances the life of the believer. (1) It perfects us. Which means it makes us what we should be. It completes us. (2) Being tried by adversity will establish us. We will be firmly set or made stable. (3) Adversity will strengthen us. We will be fortified, spiritually. (4) We will also be settled. Adversity will make us immovable, such as the foundation of a building. We will become solid and sound in our faith.

Is your faith being tried by adversity in a particular area of your life? Are you discouraged and feeling defeated because you cannot see your way through a life challenging situation? When we endure seasons of adversity we should always remember the words of Peter to the persecuted body of believers in Christ, “But the God of all grace, who hath called us unto his eternal glory by Christ Jesus, after that ye have suffered a while, make you perfect, stablish, strengthen, settle you.” (1 Peter 5:10 KJV)

One of the most unimaginable and difficult times in a woman’s life is to experience the death of a child. Whether her offspring is lost due to miscarriage or later, as an adult, a woman’s heart is broken and her mind is perplexed by the magnitude of such a loss. Under normal circumstances, when a woman holds the beautiful gift of life in her arms for the first time, she is not anticipating the possibility of having to lay her precious one to rest. Whether male or female, we all expect for our children to succeed us in life.

2 Kings 4:8-26 tells us of a woman who honored the prophet of God, Elisha. She sought her husband’s assistance in providing a place in their home to accommodate Elisha when he was in their city of Shunem. Elisha was appreciative of the woman’s kindness, and consulted with his servant, Gehazi, regarding how he could be a blessing to the Shunammite woman. Gehazi informed Elisha that she did not have a child. Elisha prophesied that she would bear a son, and it came to pass. When the boy became a youth, he was stricken with an unidentified illness and died.

The Shunammite woman, though looking at a dead situation, had the faith that all was not lost. She did not share with her husband that their son was dead, but asked him to assist her in getting to the man of God. When he questioned her about her reason for the journey, she spoke by faith, “It shall be well.”

“And she called unto her husband, and said, ‘Send me, I pray thee, one of the young men, and one of the asses, that I may run to the man of God, and come again.’ And he said, ‘Wherefore wilt thou go to him today? It is neither new moon, nor sabbath.’ And she said, ‘It shall be well.’” 2Kings 4:22-23 KJV

In both instances, this woman who is facing the darkest hour of her life speaks her faith. She tells her husband, “It shall be well.” Likewise, when she answers the prophet of God she says, “It is well.” This woman, believing in her heart that which she did not see with her eyes, spoke her faith—it is well! Elisha responded to her faith, accompanied her home, and by the power of God he resurrected her son and presented him to her.

When we face the difficult times of our life, we must look beyond the situation and speak our faith. Regardless of what we see, we must speak what we believe. Jesus said to his disciples, “For verily I say unto you, That whosoever shall say unto this mountain, Be thou removed, and be thou cast into the sea; and shall not doubt in his heart, but shall believe that those things which he saith shall come to pass; he shall have whatsoever he saith.” Mark 11:23 KJV