The Consequences of Unbelief 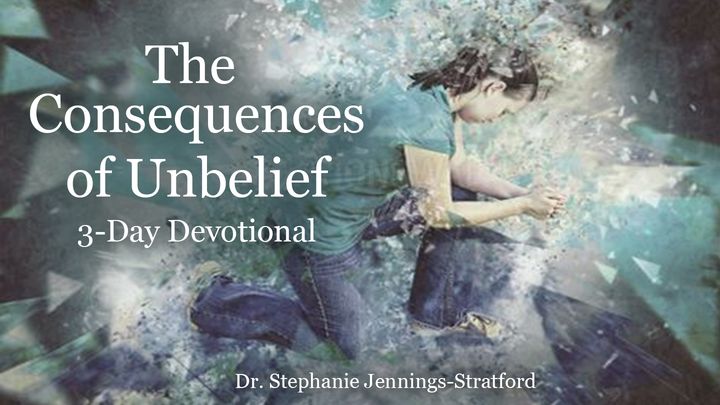 To have faith means to believe in our hearts what we cannot see with our eyes. Sometimes it is more challenging to keep our faith despite what we see. In the wilderness, the children of Israel failed to believe the promise of God because of what they saw. In this 3-day devotional, we will discover the devastating consequences of unbelief.

UNBELIEF PERPETUATES DOUBT AND FEAR IN OTHERS

As the Lord God had promised Abraham in Genesis chapter 15, He delivered the nation of Israel from the 430-year bondage of the Egyptians by a series of miracles and mighty demonstrations of His power. Along their journey to Canaan, the land of promise, Moses was instructed by God to send twelve spies, one leader from each of the tribes, to scout out the area and bring back a report. When the scouts returned, ten of the twelve gave a negative report because they feared the people that dwelled in the land (Numbers 13:25-33).

The scouts report created doubt and fear among the people (Numbers 14:1-4). As believers in Christ, we must always be aware of the power of our words. What comes forth from us will sow either life or death, faith or fear, in the hearts of the people to whom we speak. To create disciples and to increase the faith of others, we are responsible for ensuring our words minister grace to the hearers. “Let no corrupt communication proceed out of your mouth, but that which is good to the use of edifying, that it may minister grace unto the hearers (Ephesians 4:29 KJV).”

QUESTION: Do I always consider my words before I speak into the life of others?

PRAYER: Dear Lord, please create an awareness in me to speak words that will build up and increase the faith of others.

Because of the unbelief of the ten scouts, the people of Israel were afraid and doubted the promises of God. They panicked and refused to move forward to enter the land of Canaan. They decided to disobey God and return to the bondage of Egypt, rather than to trust Him for their blessing.  Obedience is an act of faith that moves us to take action. Unbelief leads us to take incorrect actions.

“And Joshua the son of Nun, and Caleb the son of Jephunneh, which were of them that searched the land, rent their clothes: And they spake unto all the company of the children of Israel, saying, ‘The land, which we passed through to search it, is an exceedingly good land. If the Lord delights in us, then he will bring us into this land, and give it us; a land which floweth with milk and honey. Only rebel not ye against the Lord, neither fear ye the people of the land; for they are bread for us: their defense is departed from them, and the Lord is with us: fear them not.’ But all the congregation bade stone them with stones. And the glory of the Lord appeared in the tabernacle of the congregation before all the children of Israel (Numbers 14:6-10 KJV).”

When we fail to believe God, it results in disobedience and rebellion. Unbelief quickly departs from the way of the Lord and relies on self-sufficiency. Faith in God develops a total dependency upon Him. Trust in the Lord eliminates taking alternative actions that are contrary to His Word.  “Trust in the Lord with all thine heart; and lean not unto thine own understanding.  In all thy ways acknowledge him, and he shall direct thy paths (Proverbs 3:5-6). ”

QUESTION: Have there been times in your life when you disobeyed God because you did not believe He would give you the desired outcome?

PRAYER: Heavenly Father, please forgive me for the times that I did not trust you enough to obey you.

“And the Lord said to Moses, ‘How long will these people treat me with contempt? Will they never believe me, even after all the miraculous signs I have done among them? I will disown them and destroy them with a plague. Then I will make you into a nation greater and mightier than they are!’ (Numbers 14:11-12 NLT)”

Throughout their journey in the wilderness, the Israelites repeatedly murmured and complained about one thing or the other. They provoked God’s anger again by failing to believe He was able to protect and provide for them in the land as He promised. Therefore, the Lord God disinherited the generation which did not believe Him. He declared everyone who was twenty or older would not enter into the land of Canaan. As a result, Moses and the people of Israel roamed the wilderness for 40 years until the last of the unbelieving generation had died off (Numbers 14:20-40).

Provoking God to anger leads to destruction. When Moses gave the word of the Lord to the people, they failed to take heed, and attempted to enter into Canaan out of disobedience. Even with God’s wrath burning against them, they chose to go their way and to do what they desired. Consequently, they were destroyed in battle by their enemies (Numbers 14:39-45).

QUESTION: When I face difficult decisions, do I go my own way? Or do I believe the word of the Lord and follow His guidance?

PRAYER: Heavenly Father, increase my faith capacity so that I may always believe you and go your way. Amen.